Historic buildings, architectural sites and churches with much to explain, these are some of the monuments you can visit during your stay in Osona. Be sure to enjoy:

You can visit all the rooms of the monastery, which house a permanent exhibition showing the life of monks in Casserres through reconstruction of rooms that have retained the same layout over the centuries. In each room there are information panels. You can also see a video explaining the legend, history and the process of building the monastery.

Guided tour:
Offers the opportunity of a visit accompanied by a guide.
– Duration: 1 hour
– Accessible activity: partially accessible to people with physical disabilities
– No. minimum group: 8 people.
– Languages: Catalan, Spanish, English and French
– Approximate price: € 3 + the price of admission. You must make a reservation by the phone. 93 744 71 18

Family activity
The monastery, surrounded by waters of the Sau reservoir, is a jewel of Catalan Romanesque architecture. But have you ever wondered how it was possible to build such a magnitude? Who was involved? Where did they get the money and materials for construction? What tools did they use? How is it possible that barrel vaults and arches still stand a thousand years after their construction? Come to Casserres and discover the secrets of the building.
– Duration: 30 minutes
– Accessible activity: partially accessible to people with physical disabilities.
– Recommended time: Saturdays and Sundays at 11 am throughout the year.
– No. max / min in group: 30/4 people
– Minimum Age: Over 5 years
– Languages: Catalan, Spanish and English
– Approximate price: First Saturday of each month: € 1 / person, enter separately. Other: € 3 / person, enter separately.

The church of Santa Maria dates from the twelfth century, and has inside it, it has a small cloister of harmonious proportions with prominent capitals. Lluçà castle ruins and the chapel of St. Vincent, of the 11th century, one of the few examples of Romanesque churches in Catalonia also form a part of the Estate.

Visit tour:
Guided tour around the architectural ensemble that will allow us to discover and understand the major part of the estate and get a very accurate idea of the life of the monks who occupied the place (Augustine). We’ll visit the nave of the church with an exhibition of jewelry, the gem of the cloister, the “sweet” gardens and the museum with original frescoes s. XIV.
– Duration: Between 1 and 1.30 hour.
– Activity accessible: activity adapted for people with physical disabilities. The estate is equipped with access ramps at key points.
– No. max/ min for groups: Groups between 60/20 people. Individuals at least four people.
– Recommended age: From 5 years
– Languages: Catalan, Spanish, English, French and German
– Approximate prices: for groups 1 € per person. Up to 20 people 1.5 euros.

Montesquieu Castle together with the surrounding gardens, exemplifies the protected territory of Castle Montesquieu Parc. There is documented evidence from the 13th century, although its origin seems possibly to be determined through a close exploration of a rectangular floor, probably of the 10th and 11th centuries. In the 17th century the Castle underwent some important modifications of extension, internal improvements were made as well as the extension of the northern facade. Major changes of the early 20th century give it today’s appearance.

For groups of 20 people or more(1.5 € per person), arranged visits
weekdays , holidays and weekends

The cathedral is a blend of Romanesque to neoclassical styles. The Cathedral’s bell dates back to the 11th century and is very unique. 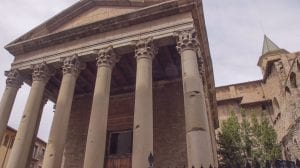 The Roman Temple is an artistic-historic monument listed as a Cultural Asset of National Interest by the Government of Catalonia.
The temple is located at the highest point of the city of Vic and was built at the turn of the 2nd century AD. However, like almost all monuments dating from antiquity, it ended up being used for other purposes in the Middle Ages and fell into disuse. Its rediscovery in 1882 came as a real surprise. An old house dating from the Middle Ages, which had belonged to the Montcada family, had been built around it.

The chapel of St. Sebastia, declared a National Cultural Heritage, is a part of the Route 1714 of the Government of Catalonia. This route is a journey through ten settings where the most significant historical events of the War of Succession in Catalonia happened. These are emblem landmarks replete with symbolism, which have an exceptional heritage and pictorial interest.

For more information on the hermitage of San Sebastián, consult the tourism website of the city of Vic.

Free guided visits
Hours:Guided tours are held every Saturday from 10 a.m. to 2 p.m. and from 4 p.m. to 8 p.m., and on Sundays from 10 a.m. to 2 p.m. From October, visiting hours on Saturdays will be reduced to six in the evening. Guided tours can also be taken on weekdays, with a prior reservation one week in advance via email : info@itinerari.cat